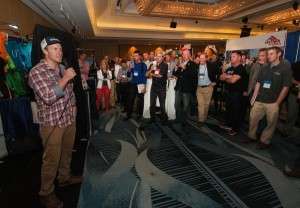 Ted Ligity announced on Monday, May 4th, 2015, from the floor of the NSAA (The National Ski Areas Association) that the US Ski team and NASTAR have partnered.

From the USSA press release regarding the new partnership:

NASTAR, which began in 1968 under the wings of SKI Magazine and its editor John Fry, is a recreational ski racing program in place at 115 resorts nationwide with over 165,000 racer days each year. Using the NASTAR handicap system, skiers at local resorts can compare their times against those of top U.S. Ski Team athletes.

The USSA and AIM have executed a letter of intent, which includes the USSA assuming operational control of NASTAR beginning this year, including program and event management as well as sponsorship and media rights.

“Being able to integrate NASTAR directly into our programs will allow us to better include competitors of all ages, encouraging them to expand their participation in ski racing and connecting them with USSA clubs and racing system nationwide,” said Shaw. “It brings together two of the strongest brands in ski racing and will help us to not only engage a new generation of ski racers, but also to have significant impact by extending our brand to new fans and USSA members.”